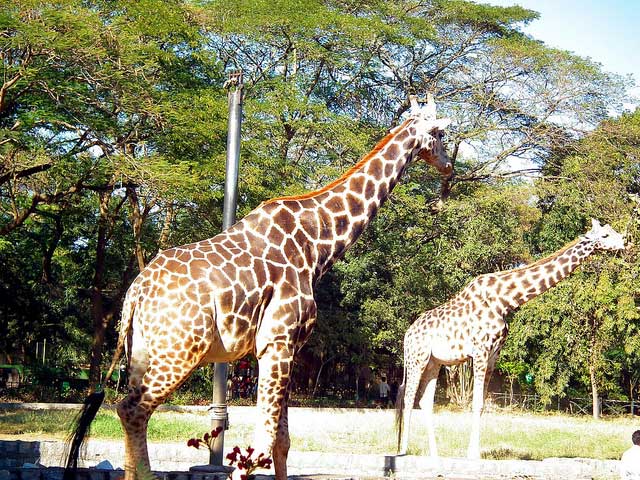 India is known to be home to a number of exotic species of animals including Snow Leopard, Royal Bengal Tiger and Asiatic Lion. The reasons for this diverse existence of fauna in the country are attributed to many salient factors including the tropical climate and variation in landscape, resulting in habitation of species that thrive in certain regions. Zoos in India are known to harbor exotic animal species that are an essential part of the earth’s ecosystems. The nurture and sustenance for these animals is carried out with extreme care and dedication on behalf of the zoos and a natural environment is fostered within their enclosures to help maintain unhindered growth for these animals. Not only do these zoos provide an asylum for endangered and exotic animals, they also encourage education on wildlife and a source of practical observation for the masses. India houses 8.1 percent of the total diversity of the planet’s species. Listed below are some of the most famous zoos in the countries that support a rich diversity of animal species.

Thiruvananthapuram zoo in the capital city of Karnataka state is known to be the oldest established zoos in Asia. Erected under the rule of Swathi Thirunal Rama Verma, the zoo was formally inaugurated by his brother Uthram Thirunal in the year 1857. The zoo is famous for harboring a range of exotic fauna that thrive in its nature identical enclosures. The entire span of the zoo covers an area of 55 acres of greens, lakes and pedestrian areas and is visited by thousands each year. The most spectacular species present within the zoo premises are One Horned Rhinoceros, Barking Deer, Hippopotamus and Anaconda amongst several other species of birds, mammals and reptiles.

The Assam State Zoo-cum-Botanical Gardens was established in the year 1957 in the city of Guwahati, Assam. Spreading across an area of 432 acres of land, it became the largest zoo in the North-East region of India. The Botanical Garden was added as an attraction to the zoo in the year 1982, hence coining it the name it is contemporarily associated with. The zoo is located within the premises of Hengrabari Reserved Forest in Guwahati and houses a wide range of species within its grounds. In the present day, there are around 113 species of birds and animals from all over the world habilitated within the zoo, raising the total number of species in the zoo to 895 including Indian species. Some of the prominent species thriving within the zoo are White Rhinos, Llama, Puma, Ostriches and Kangaroos.

National Zoological Park was established in the year 1959 within a 176-acre expanse near the Old Fort. It was decided to be constructed as a model zoo for the entire country, hence resulting in harboring around 130 species of animals and birds with a total head count of over 1300 animals in total. Delhi zoo is famous for an exotic range of animals that are entrusted to the care of the zoo authorities. Some of the main attractions of the zoo include White Tiger, Spider Monkey and Asiatic Lion. The Zoo is expansive and is a long walk on foot, which is why battery operated trams are available for visitors to hitch rides on. Eateries are made available for visitors inside the zoo but food and beverages form outside the gates are not allowed.

Situated at a close proximity to the Mysore Palace, Mysore zoo is a prominently well off zoo in the state of Karnataka. Initially constructed over 10acres of land in the year 1892, Mysore zoo now extends across an area of 157 acres of land and houses approximately 50 species of animals. The zoo is famous for its tiger population and reptile house. When in season, the reptile house is open to visitors and harbors various species of exotic reptiles from snakes to lizards. A small tiger safari is also made available adjutant to the zoo, where visitors can have a closer look at tigers in their natural habitats form armored vehicles. The main animal attractions in the zoo are Green Anacondas, Lions, Baboons, White Rhinoceros and Tigers.

Jaipur Zoo was inaugurated and opened for public access in the year 1877. Constituted under the wildlife protection act, the zoo is known to provide an asylum to exotic animals of different kinds. The zoo is located close to the Albert Hall Museum and is home to around 50 species of fauna. Jaipur is renowned for being the largest breeding ground for Gharials in India, since the establishment of the Ghariyal Breeding Farms within the zoo premises in the year 1999. Some of the most prominent species of animals in the zoo are Royal Bengal Tiger, Black Panther, Black Bear, Indian Porcupine and Flamingo.

All the zoos in India are maintained and cared for with extreme dedication and respect for wildlife. The existence of these zoos is facilitated with the idea of maintaining harmony with nature and educating the masses about wildlife in general. These zoos and zoological parks thrive because of the enthusiasm of the visitors and experience of their caretakers.