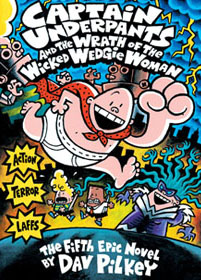 With regard to the antics of Dav Pilkey in his incomparable majestic novel series, Captain Underpants, he has been worshipped as the rising sun. You would fascinate why I say such strong words about him. And the answer is his humor and perseverance in sticking to basics while including creativity at the same time. No other book series has made such sensation in children category than Dav Pilkey books like Captain Underpants series.

1. The Adventures of Captain Underpants 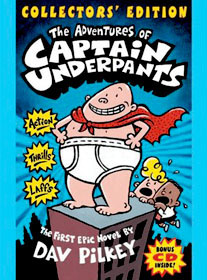 First in series of Captain Underpants, novel is about two school students, George and Harold, who are the troublemakers of a school. They indulged in the writing comics and selling them in their school playground. Fun starts when they are blackmailed by their principal for causing havoc in school. Their plan backfires when principal assumes himself of a superhero and in turn saves the planet from vicious Dr. Diaper. Captain Underpants’ comes into action and foils multiple robberies before narrowly missing from being caught by police. Mr. Krupp, who was once their principal, started behaving like a superhero, after the successful hypnotizing attempt of George and Harold. He rose like a phoenix from his ordinary and uninteresting life. Captain Underpants’ is probably the only superhero who leaves an everlasting impact on the minds of young children. Anyone can hardly come over the mania created by this book.

2. Captain Underpants and the attack of the Talking Toilets 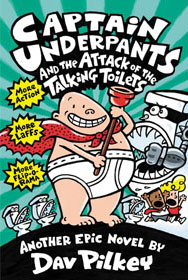 Preceded by the adventures of Captain Underpants, this book matched the mania created by its earlier version. George and Harold dreamed to become the principals of their school by winning the Invention Convention of their school. Blacklisted from participating, they decide to sabotage the inventions of other participants. By doing this their principal orders them to be in detention room and avoid any further mischief. Accidently, they make Talking Toilets alive; this resulted into great havoc where all teachers got eaten away by talking toilets. As expected George and Harold come to everyone’s rescue while being a reason for such occurrence.

3. Captain Underpants and the Invasion of the Incredibly Naughty Cafeteria Ladies 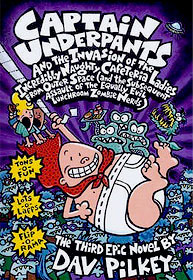 Troublesome George and Harold are again back to the limelight when they cause further mischief to cafeteria ladies by giving them baking soda recipe and causing them more frustration. They quit their jobs to avoid further embarrassment against the hands of George and Harold. In the meanwhile, three extraterrestrials land on the school’s roof to manifest their evil intentions of taking over the earth by turning everyone into giant monsters. They disguise themselves as human and start working as those cafeteria ladies. Captain Underpants’ jumps into the occasion when slowly people turn into zombies and monsters. After a fierce battle with those extraterrestrials they somehow manage to turn those zombies back into students and teachers. Dav Pilkey Books are full of excitement and for kids no other replacement can bring in such joy and thrill. Mr. Krupp continues to be in driving seat since he gained control over the things running out of control.

4. Captain Underpants and the Perilous Plot of Professor Poopypants 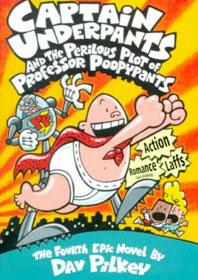 Fourth Dav Pilkey book in series is a healthy competitor to the legacy created by its precedents. Professor Poopypants receives bad welcome in USA when he receives no interest for his magnificent invention that claimed to increase food supplies and minimize garbage. He joins Harold and George’s school to teach them science but instead got mimicked by them for his name. He turns vindictive and modifies his machine into a giant one and holds his school hostage while forcing everyone to change their names into comic ones. Professor Poopypants gets defeated ultimately and affected ones’ names return to normal ones. Harold and George have no change in their silly behavior despite burning their fingers multiple times.

5. Captain Underpants and the Wrath of the Wicked Wedgie Woman

Fifth novel of the most acceptable Captain Underpants series is much adventurous and turns Ms.Ribble into a Wedgie Woman in her thoughts only. Trouble starts when George and Harold spoil Ms. Ribble’s retirement party. 3-D Hypno ring caused reverse effect on Ms.Ribble and she fascinated herself a wicked wedgie woman who is desirous to wreak havoc on mischievous people. I wish if I could turn back to a kid and enjoy all books of Dav Pilkey that is a nice and warm bag and baggage for every kid.